The Reverend, Meth, & Murder. When Ranger Tony Wagner finds a body near the border of Evergreen National Park, Drug Enforcement Administration agents recruit him to help with the investigation.

How did Harry Torini, a member of the Denver mob, end up so far from the city? The DEA arrests operators of a local meth lab for the murder.

Frustrated with their decision, Tony calls his FBI mentor, Wyatt Garret, for advice. Garret takes over a case more complex than the DEA suspected.

He and Tony soon realize that they are dealing with a far bigger threat than meth addicts. Someone willing to kill again, and even endanger the who town of Spruce Lake to escape justice. 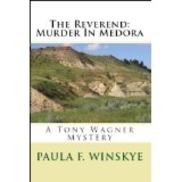 The Reverend Down East. Tony Wagner feels aimless. He loves his hectic family life with 3 kids & 3 foster daughters. But he has lost interest in his job as a national park ranger.

And, even though an FBI psychiatrist has cleared him to work, no agents have asked him to consult.

Agent Wyatt Garret calls. He has been summoned to Maine to investigate the death of a former ambassador's son.

Greg O'Connor has fallen from The Precipice in Acadia National Park. Was it murder, suicide, or just a climbing accident. Garret needs Tony to search for evidence on the cliff face. 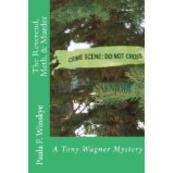 The Reverend & the Lady in Sand. When Tony Wagner & his wife Kelly arrive in North Dakota to help her parents fight a flood, he never expects to become involved in a murder investigation.

Then a human leg is discovered in the sand trucked in for the job.

Liz Robinson had been missing for months, with little evidence & a surplus of suspects.

Fargo FBI agent Allen Green asks Tony to assist with the investigation. Tony & Agent Green trim the list of potential murderers. When they begin applying pressure to the remaining suspects, the killer sets his sights on Kelly.

The Reverend: AKA Wohanota.​ A serial killer has been hunting near pow wows across the western US, leaving his victims with a distinctive tatoo. FBI agent Wyatt Garret asks Tony Wagner to join the team pursuing this killer.

Tony's Chippewa ancestry & knowledge of pow wow culture make him unique on the team. As the killer's trail leads them from New Mexico to Wisconsin, Tony finds himself getting closer to his Native American heritage.

The Reverend: Murder In Medora. When a small plane crashes in the badlands south of Medora, North Dakota, killing the pilot, investigators find bullet holes, illegal weapons, & thousands of dollars.

Before the case is solved, Tony will need all his survival skills. His endurance will be tested during the longest tracking assignment he's ever tackled.

​The Reverend & the Kidnapped Girl. Tony Wagner is called to the White Mountains of Arizona where someone has abducted a cabinet secretary's daughter & murdered her bodygaurd.

Along with Agent Garret, Tony scours the rugged landscape. They begin to unravel an elaborate plot involving multiple conspiritors.

​Meanwhile, Tony tries not to let memories of his own kidnapping distract him.

Tony finds evidence that the kidnappers took the girls into the mountains rather than leaving by road. Scattered signs keep him looking until he finds a clear trail.

FBI agent Wyatt Garret joins Tony as he tracks deep into the Rockies.

The unstable, late spring weather is the least of their problems. And finding the girls is just the beginning.

Tony faces the greatest challenges of his life. And the things he does to survive will change him forever.

​The Reverend Goes Home. FBI consultant Tony Wagner, his wife & son set off for Wisconsin to visit Tony's family. FBI agent Wyatt Garret wants him there for a different reason.

Two ATF agents have disappeared from the northern part of the state while investigating a radical faction of the Christian Army.

He never suspects that it will also make Tony a target.

The Reverend Finds His Way​ FBI consultant Tony Wagner, his wife Kelly, and their 4 children prepare to return home after a camping trip in Montana. While Tony hikes with 3 of the kids, Kelly & 16-year-old Brett pack.
Two armed carjackers grab Kelly & Brett. When Tony discovers what has happened, he sends the other kids to safety, hides his weapon, & acts passive, seeing it as the best way to protect his wife & son.
The gunmen dump Tony, Kelly, & Brett into unfamiliar wilderness. Unable to follow the road the kidnappers used, Tony sets off through the mountains, determined to lead Kelly & Brett to safety.
Only after accomplishing that can he help track down the criminals.​